What do you do when you’re back home from a trip to Berlin but still haven’t gotten your fill of this city? We’ve compiled the ultimate list of movies that help you recover your ‘Berlin feeling’ at home. They are listed by release date. 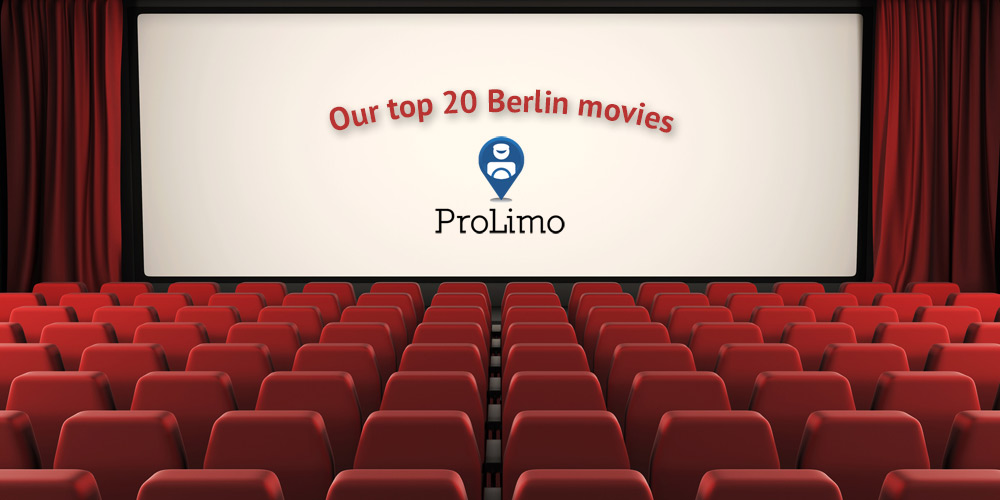 1. Berlin: Symphony of a Metropolis

This experimental documentary film, which is arranged like a symphony, shows a day in the city of Berlin in 1927. Still impressive today, it reveals what Berlin looked like before WWII broke out.

One of the best-known works in German film making. Peter Lorre portrays a murdering sex offender in 1930s Berlin.

The Summer of 1947 in bombed out Berlin. Grandiose film by Roberto Rossellini, in which a 12-year-old is responsible for the livelihood of his family

Perhaps one of Billy Wilder’s best comedies. Poignant love triangle involving an American congresswoman, an officer of the U.S. occupying forces and the wonderful Marlene Dietrich who plays a German nightclub singer.

In the middle of the Cold War, shortly before the Berlin Wall is erected, the head of Coca-Cola sends his daughter to West Berlin where she immediately falls in love with a communist from East Berlin. James Cagney portrays a local Coca-Cola executive in a fast-paced and brilliant screwball comedy.

6. The spy who came in from the Cold

One of the all time best spy thrillers takes place where East meets West, namely in the shadows of the Berlin Wall. Impressive masterpiece about the horrors of the Cold War.

Cabaret, which is set in Berlin in 1931 – shortly before the Nazis seized power – is considered the best ever film-musical by many. Based on Christopher Isherwood’s novel Goodbye to Berlin, it won 8 Oscars.

This is how Americans imagined the Cold War to be like in East Germany. A fast-paced parody and a firework of gags, this film toys with the viewing habits of the audience. With Omar Sharif as an unfortunate spy named Cedric.

Poetic drama about two angels in the divided city of Berlin in 1987. This award-winning film by Wim Wenders (remake 1998: City of Angels) features Peter Falk and Nick Cave in supporting roles.

Lola has 20 minutes to procure 100.000 DM to save her friend. In this high-speed action film, she runs through the streets of Berlin and lives through these 20 minutes three times in a time loop. Each time, small coincidences lead to a different outcome.

An East Berlin resident who is loyal to the party line slips into a coma shortly before the fall of the Berlin Wall. She wakes up 8 months later in a completely changed country. To go easy on her weak heart, her children decide to pretend that East Germany still exists.

Adolf Hitler’s last days in the Führer bunker in Berlin in April of 1945. Bruno Ganz is marvelous in the role of the Führer.

This movie is based on a true story about a group of young escape helpers in West Berlin. After the Berlin Wall was built, they dug a tunnel so that their families could escape from East to West Berlin.

14. The Lives of the Others

While conducting a surveillance operation targeting a free-spirited artist couple, a Stasi agent who toes the party line increasingly gets caught up in their lives. He has to make up his mind what is more important – the state or the lives of the others. In 2006, this movie won an Oscar in the category ‘Best Foreign Movie’.

Owing to excessive drug use, techno DJ Ickarus finds himself in a downward spiral and winds up being sectioned. Realistic film about Berlin‘s club and techno scene that introduces viewers to the culture of electronic music.

In this film, Tom Cruise plays Claus Schenk Graf von Stauffenberg. In an effort to end World War II, this German colonel attempted a coup – along with a military group – and tried to kill Hitler with a bomb on 20 July 1944. Partly filmed at the original Bendlerblock location in what is now the German Resistance Memorial Center.

Twenty-four hours in the life of a young man in Berlin. This is the kind of story that could take place in Berlin-Kreuzberg or Berlin-Neukölln at any day.

Partly film at Tempelhof Airport and Glienicker Bridge, this film by Steven Spielberg is about the legendary spy exchange on 10 February 1962 involving the Russian spy Rudolph Abel and U2 pilot Gary Francis Powers, who had been shot down over the Soviet Union.

Filmed in real time in a single shot: A young Spanish woman moves to Berlin and meets upon four authentic Berliners, parties with them, falls in love and accompanies them on a bank robbery. A cinematically-sensational ride through Berlin by night.